The Culture of Costco I hate feeling like I am just on a bandwagon and I generally like to move in the opposite direction of the crowd but Costco is one company that isn't a fad, rather has consistently produced results year after year.  Yes, it may be a darling of wall street but there is a reason for its impressive performance and I would like to focus on the cultural aspects of this performance in this post.

Once again a BusinessWeek article is the focus of the content for this post and their recent article entitled "How Cheap is Craig Jelinek?" - focused on the CEO of Costco.  As you read through notice the following ways that the Costco culture is one of corporate bravery.

1. Employee culture - pay nearly 2 x industry average.  No massive downsizings during the recession has led to some of the most engaged employees in retail.  Result is employees have less employment anxiety.  Another example of this is the health benefits provided to their employees:


Costco workers with [health] coverage pay premiums that amount to less than 10 percent of the overall cost of their plans. It treats its employees well in the belief that a happier work environment will result in a more profitable company. “I just think people need to make a living wage with health benefits,” says Jelinek. “It also puts more money back into the economy and creates a healthier country. It’s really that simple.”  In February, Jelinek set Costco’s convictions in ink, writing a public letter at the behest of Nader, urging Congress to increase the federal minimum wage for the first time since 2009. “We know it’s a lot more profitable in the long term to minimize employee turnover and maximize employee productivity, commitment and loyalty,” he wrote.

2. Costco doesn't have teams of public relations and corporate attorneys like many corporations do when they reflect their corporate fears of lawsuits, bad press, and the sometimes negative consequences of someone grinding an axe.


Costco has no public-relations staff. Jelinek conducts an interview with a journalist alone, an anomaly at major corporations, and afterward Costco Chief Financial Officer Richard Galanti calls to inquire whether the boss inadvertently said anything negative. Sinegal returns a reporter’s phone call on a Saturday morning, leaving his cell number.
In February, Tiffany (TIF) filed a multimillion-dollar trademark infringement suit against Costco alleging it improperly labeled merchandise as “Tiffany engagement rings.” Galanti calls it “an honest mistake” and says they should have been labeled “Tiffany-style.” The suit is pending.

labeling something an honest mistake would be a major no-no in a company driven by legal fear as it implies some level of culpability.

3. They are not overly driven by fear of their competition..... although the BW article include wariness towards Wal-Mart's overall size and Amazon's web capabilities but the focus of those comments were more around concerns about consumers' shifting habits.


“They are buying and selling more olive oil, more cranberry juice, more throw rugs than just about anybody,” says David Schick, an analyst at Stifel Nicolaus. And that allows Costco to get bulk discounts from its suppliers, often setting the industry’s lowest price. Even Amazon can’t beat Costco’s prices, which means that “showrooming,” or browsing in stores but buying online for the better price, isn’t much of a concern for Jelinek.

It is because they know who they are and how they best compete in the marketplace.  This extends to their vendor relationships as well.  Even though a product would be great for their customers - if the vendor places restrictions on the sale that do not match how they go to market they have a stern response:


Costco is sensitive to any perceived slights from its vendors. It canceled a relationship with Apple (AAPL) in 2010 because the company wouldn’t sell it anything other than the iPod, and wouldn’t allow it to sell any Apple products online. It has also at times curtailed its sale of products from Sony (SNE) andPanasonic (6752:JP) over such issues.

4. They are not driven by investor fears as demonstrated by this excerpt from the BW article regarding wage increases during the Great Recession and investor pressure to do otherwise.  They have a long-term perspective and are focused on doing the right thing for the employees even at a detriment in the short-term.


Costco went public in 1985, and over the years, Wall Street repeatedly asked it to reduce wages and health benefits. Sinegal instead boosted them every three years.
As the economic downturn worsened in the fall of 2009, Costco, like every other retailer, started seeing declines in same-store sales. Macy’s (M), Best Buy (BBY),Home Depot (HD), and Office Depot (ODP) were resorting to layoffs and wage cuts, but Sinegal approved a $1.50-an-hour wage increase for hourly employees, spread out over three years. “The first thing out of Jim’s mouth was, ‘This economy is bad. We should be figuring out how to give them more, not less,’ ” says CFO Galanti, who adds that Sinegal’s decision to parcel out the raise in three annual 50-cent increments, instead of more gradually, cost an extra $20 million. The founder’s stubborn resolve remains a point of pride. “Could Costco make more money if the average wage was two or three dollars lower?” asks Galanti. “The answer is yes. But we’re not going to do it.”

Why is culture so important?  Because all of these examples where decision making wasn't being done out of fear - rather out of conviction and knowing who they were as a corporation occurred during and after a CEO change from the original founder.  Organizations who do not have a full appreciation for who they are quickly change their behaviour once the previous leader has moved on and that has not occurred with Craig Jelinek (pictured below - right). 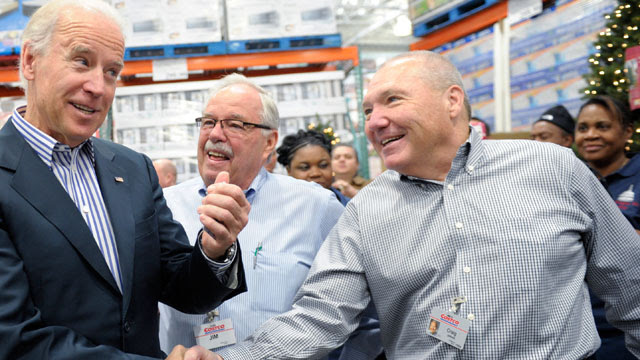