Often the phrase corporate politics leads to emotional reactions. It could be greeted with eye rolls or a sinking feeling inside your gut.


I have embedded a slideshare below and I would love to hear your personal stories, feedback on the approach or other ways you have seen corporate politics play out in a good way. The comments section is below.


Corporate Politics - Turning a Negative Into a Positive from Darrin Murriner

Jerk Bosses and Their Successes (or failure?)

I recently came across one of my favorite news articles of the year in the Atlantic. The article, entitled "Why It Pays to Be a Jerk" is a long read and includes some great photos like the one below: 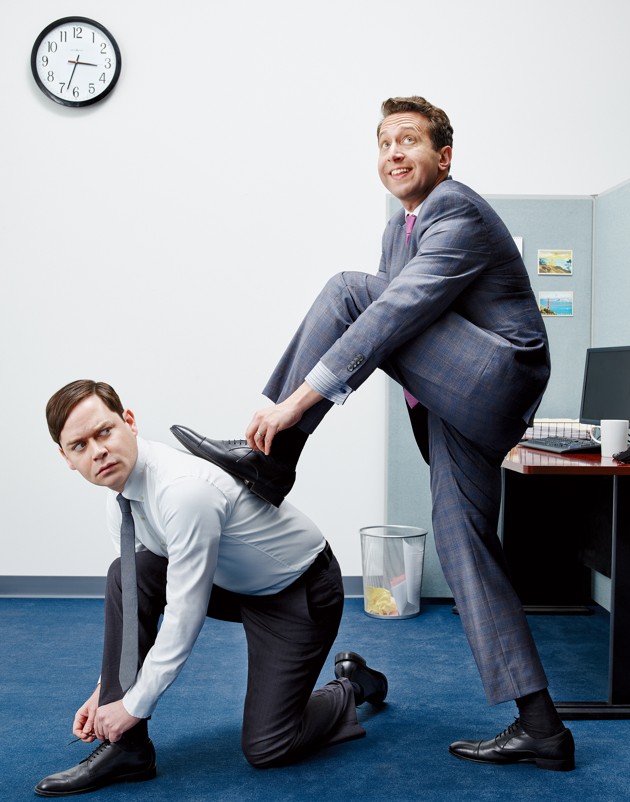 The article looks at scientific (and unscientific anecdotes) evidence regarding jerk-ish behavior - primarily in the workplace - and its impact on your ability to have success in the short and long-term.

This is relevant at Corporate Bravery because we spend a lot of time in the forthcoming book of the same name discussing bad managers' role in creating a culture of fear. Trust is at the heart of good managers and creating a culture that isn't fearful but brave in attacking new business opportunities and growing a long-term, sustainable business.

If that is so why does bad behavior that erodes trust persist in Corporate America? The article cites a few reasons. The first is embodied in the following quote.

But “to the extent that innovation and risk taking are in short supply in the corporate world”—an assertion few would contest—“narcissists are the ones who are going to step up to the plate.”

Grant argues that many takers are good at hiding their unpleasant side from potential benefactors—at “kissing up and kicking down,” as the saying goes. The article mentions a video series experiment where regular people were shown two different management styles to gauge their preference in managers.


And in a series of follow-up studies involving different pairs of videos, participants, responding to prompts, made statements such as “I would like this person as my boss” and “I would give this person a promotion.” The conditions had to be right, but when they were, rule breakers were more likely to be put in charge.

In fact, it’s easy to see how an initial advantage derived from a lack of self-awareness, or from a deliberate attempt to fake competence, or from a variety of other, similar heelish behaviors could become permanent. Once a hierarchy emerges, the literature shows, people tend to construct after-the-fact rationalizations about why those in charge should be in charge. Likewise, the experience of power leads people to exhibit yet more power-signaling behaviors (displaying aggressive body language, taking extra cookies from the common plate). And not least, it gives them a chance to practice their hand at advocating an agenda, directing a discussion, and recruiting allies—building genuine leadership skills that help legitimize and perpetuate their status.

The commonality for most of the examples provided in the Atlantic article is a lack of trust.

Should something go wrong, jerks don’t have a reserve of goodwill to fall back on. The article tells the story of Howell Raines at the New York Times and how a scandal broke on his watch in 2003 when a Times reporter, Jayson Blair, had been fabricating material in his stories.

A town-hall meeting that was intended to clear the air around the scandal, during which Raines appeared before staff members to answer questions, turned into a popular uprising against his management style. “People feel less led than bullied,” said Joe Sexton, a deputy editor for the Metro section. “I believe at a deep level you guys have lost the confidence of many parts of the newsroom.”

Raines himself had acknowledged as much earlier in the meeting. “You view me as inaccessible and arrogant,” he said. “Fear is a problem to such an extent, I was told, that editors are scared to bring me bad news.” It was an attempt to show he was a listener, Seth Mnookin reported in his book Hard News. But after listening to Sexton’s comments, Raines blew up. “Don’t demagogue me!” he shouted.

The article concludes - being a jerk will fail most people most of the time. Yet in at least three situations, a touch of jerkiness can be helpful.

2. at the moment after a group has formed but its hierarchy has not.

3. when the group’s survival is in question, speed is essential, and a paralyzing existential doubt is in the air. (when fear is driving behavior)
Posted by Darrin Murriner No comments:

The primary point of the article was a focus on his lineup decisions. Specifically the decision to move all-star and all-defensive veteran Andre Iguodala to the bench at the start of the season and then to scrap the lineup that had gotten Golden State to the championship round in favor of a smaller lineup.

The primary reason given for the last minute change was a suggestion by their video manager, a 28 year old that had been studying film. According to the article,


"So Kerr decided to wipe the blackboard clean, taking All-Defensive Second Team, rim-protecting center Andrew Bogut out of the rotation altogether, and going to an uber-small-ball unit anchored by the 6-6 undersized power forward Draymond Green. He also resuscitated David Lee, like Iguodala, another mothballed, highly paid former All-Star before Game 3, a ploy that kickstarted Steph Curry’s game in the midst of what ended up being a failed comeback effort.

Considering the stakes, this was a downright radical move on Kerr’s part, and one that easily could have blown up in his face."

As the article points out, it is unique that an NBA coach (or any business executive) would listen to an entry-level employee over the high paid executives and assistants.


"Outside of Gregg Popovich’s Spurs, this just doesn’t happen. Video assistants don’t get to pitch the man in charge, let alone get the credit, and the vast majority of head coaches are far too small-c conservative and risk-averse to even contemplate such a move, let alone admit that he lied about it."

But that single decision isn't the thing that ultimately made Steve Kerr a great leader, a championship leader. Rather it was the culture and the tone that he set before the season even began. He created a culture that made it not only OK to accept a lesser role for the good of the team, but even encouraged it.


Kerr demanded that they have fun. That in and of itself is revolutionary. More to the point, he was willing to speak to his players not like soldiers or faceless office drones, but like... well, people that he trusted and legitimately liked. That’s why Iguodala bought in early on, and Andrew Bogut and David Lee did the same.


2. I was able to recently read an excerpt from a new book about Blackberry entitled "Losing the Signal: The Untold Story Behind the Extraordinary Rise and Spectacular Fall of Blackberry."

The book looks to be an extraordinary read about the fall of a high-tech highflier and the individual decisions that led them to a struggle for survival.