What Happens When A City is Brave

In the few months since I started this blog I have profiled brave business leaders and what it looks like to overcome fear in a corporate context but I want to talk today about being a brave city.

A city is different than a corporation because it is the people that makes a city and democracy is the ultimate form of accountability.  Business leaders and eras of leadership can define a corporation and while political leaders can leave a mark it is the people of the city that create the culture and define who a city is.

An interesting case in fear and bravery is Cincinnati.  It happens to be my adopted hometown (I live in a suburb and own property in the city) and I have learned a few things about the culture of the community in the decade and a half since I moved there.

This DNA manifests as a change aversion deeper than anything seen in other parts of the United States.  At its core this change aversion is rooted in fear.  Fear of trying new things, of stepping out boldly, of trying new modes of transportation, of embracing new industries.  One of the best historical examples is when the 'Queen City' (that is the name we were given by Longfellow when we were the largest city in the West) placed a bet on barges as the nation's transportation future instead of the railroads and subsequently watched Chicago flourish and surpass Cincinnati as an inter-modal and commodities hub. 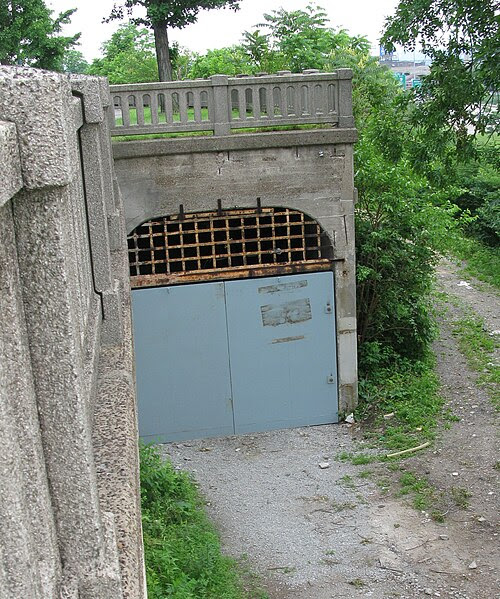 Or what about the half-finished subway?  That's right, what began as a vision for 7+ miles of subways connecting previously disconnected neighborhoods in 1910 for a sum of $6 million ended in decades of squabbling over escalating costs and questions about the viability of rapid transit in a period of the automobile.  What is left is hollow tunnels that exist to this day with no tracks and no riders.

If you live in Cincinnati, you are sick of hearing the famous Mark Twain quote, "When the end of the world comes, I want to be in Cincinnati because it's always twenty years behind the times."

It is perhaps the weariness of seeing this quote played out again and again that has made a loud and growing group of people stand up and say enough is enough.  The flashpoint is the multiple waves of attacks against the city's plan for a streetcar.

In its current incarnation the plan has weathered multiple elections, changes in mayoral and city council support to the point where $35 million has been spent to relocate utilities, build 10 blocks of track, buy the actual streetcars, among other investments only to see the new mayor halt all construction at the risk of losing $45 million in federal transportation spending. 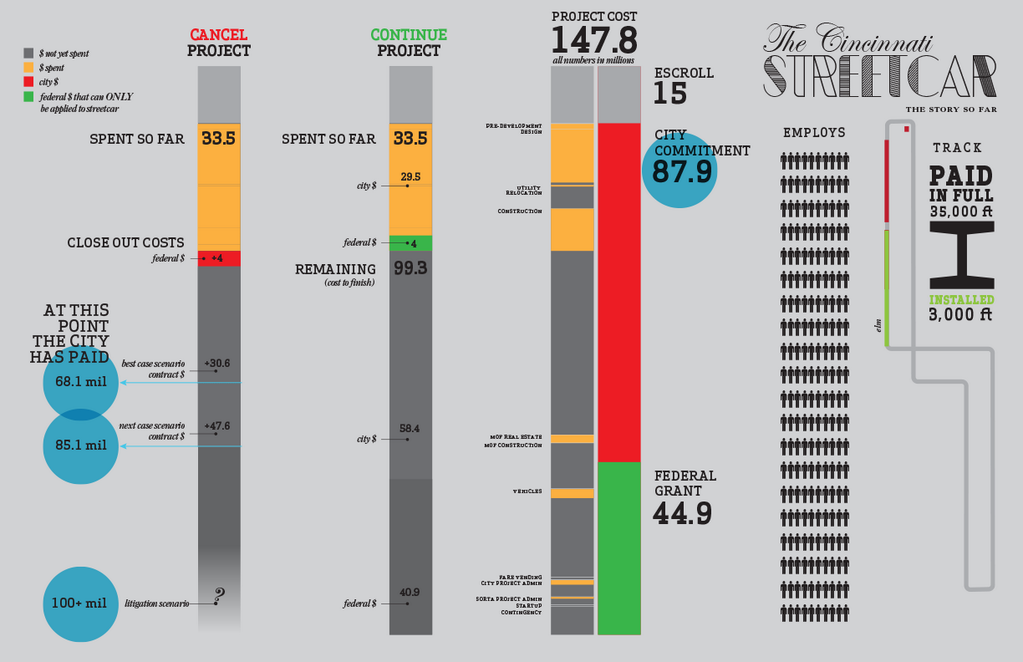 For a city that has seen a massive renassiance over the past 10 years it is a line in the sand.  After turning the tide with an emerging start-up scene, the re-birth of a great neighborhood in OTR (Over-the-Rhine), an improving reputation through movies and the media, the city had finally started to shake off the rust belt malaise that had beset it for the past few decades.  Being at the precipice of a new story for the city - one that embraces change, is adventurous, and willing to make bold gambles only makes the current struggles that much more difficult to swallow for emerging Millenials and Gen X'ers who have fallen in love with the city only to watch fear creep back into the city's psyche.

The question for the city now is do we continue to live with the embarrassments of the past century or do we shake off the labels and condescension for a new future.  The rest of the story will be written over the coming weeks and months but what is clear is that there is a growing group of people in the city interested in writing a new story for Cincinnati.  One that isn't rooted in fear and failure but rather on hope, optimism, and bravery.
Posted by Darrin Murriner 3 comments:

Nelson Mandela and the Art of Politics

Yesterday I wrote about Nelson Mandela's view on fear and the lesson it provides us today in our busy corporate lives.  Today I want to focus on another Mandela quote that teaches us about a component of living a brave corporate life.


"A good leader can engage in debate frankly and thoroughly, knowing that at the end he and the other side must be closer, and thus emerge stronger.  You don't have that idea when you are arrogant, superficial, and uninformed."

I spend a whole chapter in my upcoming book Corporate Bravery on politics.  Not the politics that we think of from Fox News and MSNBC but the true essence of politics.  Corporate politics has the ability to inject fear into a corporate culture but that doesn't have to be the case.  Politics are an essential part of getting things done since at its core it is just finding common ground between two differing perspectives or positions.

Whether in business or in government the true art of politics has been lost.  Listening to opposing positions, searching for a compromise, using the power of a position to move people closer to a reasonable solution are all lost arts.  However, they are extremely necessary for a functional organization.

This infographic from the Economist highlights the growing divide of politic discourse in our government and unfortunately we imitate in a corporate context what we see played out on television in our government.

Jack Welch had this to say about the lost art of schmoozing - his way of saying politics:
“You have to schmooze.  You can’t suddenly burst out of your office to build relationships when you hear rumbles of trouble from down below, and it’s certainly too late by the time a crisis flares. No, schmoozing has to be what you do all the time as a leader; it has to be a massive part of your job.
Building — in two big fat words — trust and transparency.  And look, we’re not talking about the standard, ho-ho-ho kind of social schmoozing you do with your customers and your team and your boss. That’s easy. That’s like President Obama schmoozing with Nancy Pelosi, or John Boehner schmoozing with Eric Cantor.
Leaders have to do something harder and more essential; something that can feel awkward at first. You have to schmooze with your known “adversaries” too, say, for instance, your union, or the group of employees who hate your new strategy and want the old one back. The resistors that exist in every organization. The perennial naysayers. Smart and annoying. Them.”
Nelson Mandela understood this better than anyone.  He built trust with his adversaries.  They may not have agreed with his position but through the trust that he had built they were willing to work with him to find a better solution.


Posted by Darrin Murriner No comments:

With the public ceremony of Mandela's life occurring as I write this, you are probably thinking do we need another tribute to Nelson Mandela.  This post isn't necessarily a tribute as much as it is an opportunity to recap what we learned about fear and courage from Nelson Mandela and how this can be applied to your daily work. 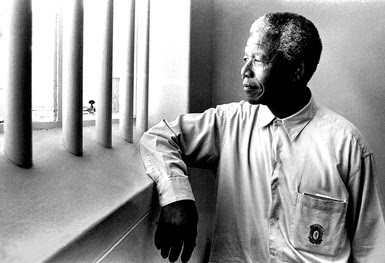 With his recent passing there is no shortage of quotes being repeated from his many public speeches over the years.  There are a couple of quotes that are very relevant to where we are today as a society and a business culture and that I plan to use in the book.  This post will focus on one specifically with another post to follow on the second.

The first speaks to fear specifically.  As a recap of what Mandela had to overcome from a fear perspective to reach the heights that he was able to achieve here is a summary of the ways he had to overcome fearful situations:
Despite this and many more hardships underlying the bullet point headlines above he had this to say about fear:


"I learned that courage was not the absence of fear, but the triumph over it.  The brave man is not he who does not feel afraid, but he who conquers fear."

As I have been writing the book Corporate Bravery it there has been a central question that must be answered.  Many want to deal with fear by insulating and inoculating themselves and those they love from the opportunity to experience fear.  And in many ways it is this attempt at dealing with fear that creates its own level of cultural fear in many organizations.  This doesn't mean that we shouldn't try to eradicate situations that create a culture of fear and cause decision making to be driven by it, but that we shouldn't try to avoid situations that are scary in a business context.

Instead, we need to put our employees in situations that can be difficult, and stretch their capabilities.  In a sense interject opportunities for personal fear in a way that allows them to overcome and learn from their decision making processes.  You can never truly make brave decisions unless you have been through the fire and conquered those situations where fear could reign.