Lessons from 40 Years of SNL

Like 23 million other people, I watched the 40th anniversary special of Saturday Night Live this past weekend. I laughed at the latest installment of Jeopardy, mourned Chris Farley all over again and enjoyed the comedy of Louis CK and Jerry Seinfeld.

There were a lot of laughs but also some awkward moments, such as Eddie Murphy's return. It was like he hadn't been on a stage in 35 years. As uneven as the show was, it still produced a lot of laughs and it also was a reminder about an important business / life lesson. Life is uneven.

I read an article in the Hollywood reporter about Lorne Michaels, the genius of SNL that has been a mainstay of the show for 40 years. He created and continues to lead SNL and put together what was the spectacle of the 40th anniversary special. He had this to say about SNL, specifically as a response to the question of whether he has ever felt satisfied with the show.


I used to say that on my tombstone would be the word 'uneven' because [the show has] never been described any other way in a review. It's only cumulatively that you sort of go, "Oh yeah, that." You can't be perfect for 90 minutes. We don't do spectacle and don't have much of a wide shot, so when you see somebody going into lens and taking it to some level that you hadn't seen even at dress rehearsal, it's a magical thing. I believe there's at least one or two of those in almost every show.

This quote made me think about the unevenness of life and specifically business. You can't 'bat a thousand' yet the cultures in many of our organizations expect or even demand perfection. Co-workers use your stumbles as opportunities to score political points and managers lose their ability to allow mistakes as a result of having previous decisions second guessed.

From helicopter parenting to legislating safety in mundane daily activities, our culture continues to try and short-circuit the learning process.

The most recent example of this trend, but in a business context, was an article from the February 11th Wall Street Journal entitled "You're Awesome! Firms Stop Negative Feedback". The premise of the article is that the trend in corporate America is to minimize or avoid all-together any negative aspects of performance and to focus on strengths only. A couple of comments from the article that are particularly striking:


"Commerce company Wayfair teaches its managers how to make feedback 'palatable', according to learning and development specialist Ashley Kibitz, so that the company's hundreds of young workers, "not only understand they're doing a great job but exactly what it is they're doing great."

"No judging, rating or critiquing is allowed at VMWare, says Victoria Sevilla, who develops training for employees there. 'It doesn't depress employees into thinking one more thing to develop, one more thing that's wrong' she says."

Hey, I like the Strengths Finder process as much as the next person, but I don't think this is exactly what they had in mind when they want their readers to focus on their strengths. Ignoring their weaknesses all together is not part of the process.

Don't get me wrong, I think it is important to spend as much time as possible on positive feedback. As a manager I have experienced first-hand the power this has on employees' performance. However, avoiding difficult conversations that need to be had only creates conflicting expectations, eroding performance and / or cultural issues with your team.

While growing up in church as a kid I would hear stories from the Bible about the dreaded disease of Leprosy and only recently realized that those afflicted with the disease lost extremities - not because of the disease itself but because they had an inability to feel pain and thus lost parts of extremities due to repeated injuries. I can't help but think this is the same thing that is happening in organizations employing this approach - but it is our people that are atrophying.

The problem with many of our organizations is that our Managers have a different mindset regarding safety and try and insulate their people from making mistakes either to avoid pain for themselves or for their people. In reality the safety that we need isn’t to not feel pain but to know that when those situations arise our managers will help us learn what caused the pain and thus correct our performance to be successful the next time we step out boldly towards results.

Along that line of reasoning the article provided this counterpoint:

Reading this article from the Wall Street Journal from January 2015 entitled As Regulators Focus on Culture, Wall Street Struggles to Define It I was struck by how out of touch management and regulators are in defining and creating a positive and effective work culture within the banking industry.

The problem with this focus and struggle with culture is that it is driven by a desire to avoid future regulatory problems rather than a real interest in creating an environment that is engaging for employees where they might actually enjoy spending a significant part of their daily lives.

Some of the typical things that have characterized bank cultures include being one of the last industries to have a strict dress code, oftentimes requiring a logo lapel pin to be worn at all times. Banks have typically had very hierarchical organizational structures where the running joke is everyone has a Vice President title. Banks have typically lacked flexibility in working time and location and have been rigid with other aspects of work environment.

Other things about typical bank culture is bank hopping. It is not uncommon for many in management at banks to have worked at several different banks within a 5 or 10 year span as that was the path to greater financial rewards. Taking a book of business to another bank is rewarded.

These aspects and more show up in turnover numbers. When I worked for a large regional bank in the 2000's the turnover rate for the entire bank of 20,000 employees consistently ran in the high 20% to low 30% range. This study on turnover rates in late 2012 showed that the banking industry as a whole had one of the highest turnover rates of all industries.

One of my favorite lines from this article says "regulators acknowledge that culture is a difficult thing to measure". This led banks to measure things like how often employees go to happy hour or how they score on a happy to grumpy ratio. This is measured by defining happy employees as those who say they are satisfied and are more likely to act ethically. Satisfaction is way different than engagement and being happy may just mean they are well paid - again incentivizing the very behavior they are trying to root out.

The article also mentions that the industry is spending millions on workplace consultants specializing in how to measure culture including the use of surveys to tease out attitudes around pay being the best measure of success. When I asked a friend in the banking industry, specifically branch management, about this he indicated that no one answered these surveys honestly because no one wants district and regional managers in the branch. The fear of additional scrutiny and oversight invalidated the results but made management feel better about how well they are doing with culture when in fact fear was driving the behavior.

According to the article, one consulting firm hired by a bank determined it was a red flag when employees used the term 'workaround' in internal communications because it indicated a willingness to bypass set rules or policies. If you have ever worked in a bank you would know it requires work arounds of large and unwieldy systems and bureaucracies just to serve the customer. Well intentioned employees now flagged as possible threats - sounds like a good culture inducing policy to me. 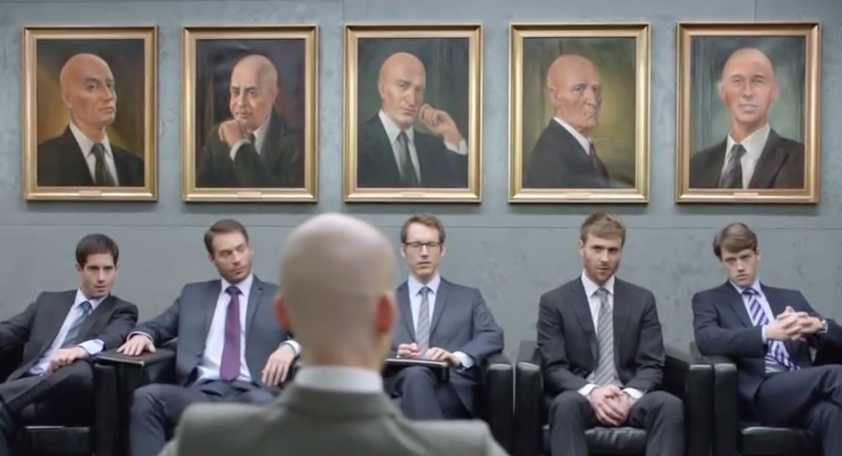 I saw this commercial recently for Schick where the premise of the commercial is that of a man that shows up for an interview and while sitting in the lobby of the office awaiting the interview he notices that the pictures of the executives are all bald. To gain an advantage in the interview he runs out and shaves his head using a Schick razor and the commercial ends with the other men with obvious concern.

Perhaps this speaks to some men, but honestly it makes me never want to buy a Schick razor - EVER. The message is that it is OK to present yourself as someone you are not in order to get the job. But what happens when after a few days on the job he and his manager realizes that culturally he isn't a good fit or that he has to compromise more than just his hair in order to be successful at this company?

It is yet another sad attempt by marketers to tell us we need to act a certain way to get ahead in business and it is patently false. And unfortunately it is another in a long line of examples recently that show how advertisers continue to chase some idea about who we are as consumers that just doesn't line up with our real values.

The Wall Street Journal ran an article in January about this tweet from Denny's in September of 2014. According to the article,


"The message, which to teens translates to "these hash browns are on point," garnered almost 30,000 retweets and was seen in the advertising industry as something of a social media marketing masterstroke. Taco Bell & IHOP later sent out their own tweets using the phrase "on fleek" looking to get in on the action."

The article goes on to discuss that while these examples may generate some buzz it also has the opportunity to 'provoke eye rolling' for the obvious attempt at trying to act cool. The problem is that consumers see straight through weak attempts to be something that you aren't. This example is punctuated by the sad copy cat nature of Taco Bell and IHOP's attempt to use the same phrase later the same day. It is all akin to your dad using some slang term that is an obvious break from character and only serves to prove how out of touch he really is with your culture.