The Point of the Amazon NY Times Article

There has been a lot of conversation about the recent New York Times piece on Amazon.com. While there has been some negative backlash from Bezos and insiders at Amazon, it appears, based on other accounts that the author's perspective on the culture at Amazon is closer to reality than fiction.

But as this Fast Company article points out, why has this article about work culture in the tech industry created so much buzz? Isn't it true that Amazon's culture just mirrors that of silicon valley or other great technology centers in the United States?

For many in the business press it is seen as yet another example of a 'win at all costs' culture that typically drives disengagement and an unhappy workforce. Typically I would decry the kind of behavior and attitudes embodied in the Amazon culture. For example, take a look at this early quote in the article:


At Amazon, workers are encouraged to tear apart one another’s ideas in meetings, toil long and late (emails arrive past midnight, followed by text messages asking why they were not answered), and held to standards that the company boasts are “unreasonably high.” The internal phone directory instructs colleagues on how to send secret feedback to one another’s bosses. Employees say it is frequently used to sabotage others.

However, I have a different perspective on this particular story. Understand that I am not condoning this type of behavior or even the culture that has been created but it can make sense for a company like Amazon. Take a look at this quote from the story about the conflict that employees feel about the culture:


However, more than 100 current and former Amazonians described how they tried to reconcile the sometimes-punishing aspects of their workplace with what many called its thrilling power to create.

I contend that Amazon has actually done a wonderful job of creating alignment with the culture, hiring & people practices and the brand they are creating in the eyes of their customers.

In my forthcoming book, Corporate Bravery, I argue that one of the hallmarks of fearful vs brave organizations is alignment of these three aspects of culture. 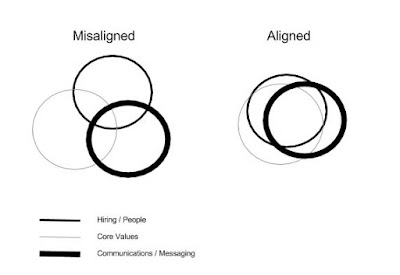 According to the article Amazon has very clearly defined core values (of which they are quizzed and expected to be able to recite and they have a clearly aligned hiring process as shown in the following two quotes:


To be the best Amazonians they can be, they should be guided by the leadership principles, 14 rules inscribed on handy laminated cards. When quizzed days later, those with perfect scores earn a virtual award proclaiming, “I’m Peculiar” — the company’s proud phrase for overturning workplace conventions.

The process begins when Amazon’s legions of recruiters identify thousands of job prospects each year, who face extra screening by “bar raisers,” star employees and part-time interviewers charged with ensuring that only the best are hired.


Which leads to a process where employees begin to internalize the culture. According to one person interviewed for the article "she and other workers had no shortage of career options but said they had internalized Amazon’s priorities."
Again, I am not advocating Amazon's culture or the individual aspects of the culture that has made it what it is today. I am just saying that the article paints the picture of a company that has one of the most aligned core values, hiring practices and communications that I have ever seen.

Where Amazon runs into criticism (and the article chronicles), is in the moral / human cost of this culture.  If you could only have this type of alignment that values the employee as a human and recognizes their own individuality (coincidentally another fear factor chronicled in Corporate Bravery) then you have a great example of building a corporate culture.
Posted by Darrin Murriner