Amazon's Use of Fear

A recent issue of BusinessWeek had a cover story on Jeff Bezos of Amazon.  The article is actually an excerpt of a book on Bezos by BusinessWeek author, Brad Stone.  In addition to being a good historical account of the rise of the company that may actually give Walmart a run for its money it also had a feel good moment by finding Jeff's biological dad and starting the process of reuniting the two men.

While there were a lot of interesting tidbits in the article the thing I found most interesting was Amazon's use (it appears driven by Bezos) of fear as a competitive weapon. 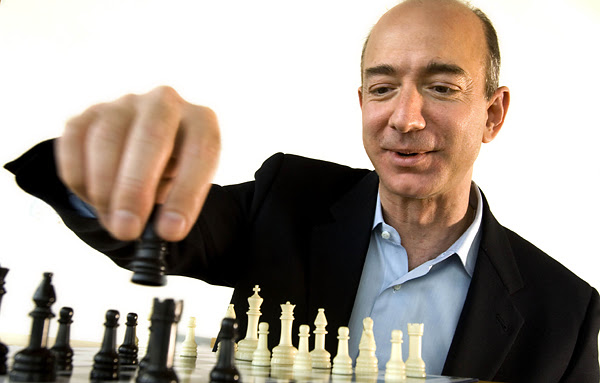 As I read the article I see 4 ways that Amazon uses fear and each are outlined below:

1. Much was made early in the article about the general communications protocol within Amazon.  In addition to the discussion of the infamous position papers that each meeting is required to begin with, is how the CEO's '?' email.  While the intent of the emails are rooted in a relentless drive for customer satisfaction, it appears to have fear-based consequences.  I have been on the receiving end of these types of communications and I am sure if CEOs knew the type & extent of hand-wringing that go on around these types of communication they would think twice before sending.  From the article:


When Amazon employees get a Bezos question mark e-mail, they react as though they’ve discovered a ticking bomb. They’ve typically got a few hours to solve whatever issue the CEO has flagged and prepare a thorough explanation for how it occurred, a response that will be reviewed by a succession of managers before the answer is presented to Bezos himself.


2. Amazon's response to the competition is an area that isn't exactly driven by fear or hoping to capitalize on fear but it is worth noting their approach.  The article focuses on an internal team at Amazon known as the Competitive Intelligence Team.  It is a novel approach of focused, dedicated resources monitoring the activities of the competition.  It is smart to monitor what the competition is doing as long as you can maintain your corporate identity and not just react out of fear.  It appears Amazon understands this balance and the article describes the team as:


focused in part on buying large volumes of merchandise from other online retailers and measuring the quality and speed of their services—how easy it is to buy, how fast the shipping is, and so forth. The mandate is to investigate whether any rival is doing a better job than Amazon and then present the data to a committee of Bezos and other senior executives, who ensure that the company addresses any emerging threat and catches up quickly.

3. The response to the results of this team is where Amazon begins to use fear as a competitive weapon.  The example that BusinessWeek gives is of Diapers.com.  Amazon noticed that they were having a hard time competing with Diapers.com in this particular segment so they pressured and coerced the ownership of Diapers.com to sell to them at $60 million less than what Wal-mart was willing to offer.  The quote from the owners was the following


The [Diapers.com] board convened to discuss the possibility of letting the Amazon deal expire and then resuming negotiations with Wal-Mart. But by then, Bezos’s Khrushchev-like willingness to use the thermonuclear option had had its intended effect. The [Diapers.com] executives stuck with Amazon, largely out of fear. The deal was announced on Nov. 8, 2010.


Even leaving Amazon can be a combative process—the company is not above sending letters threatening legal action if an employee takes a similar job at a competitor. Masud, who left Amazon for EBay (EBAY) in 2010, received such a threat. (EBay resolved the matter privately.)